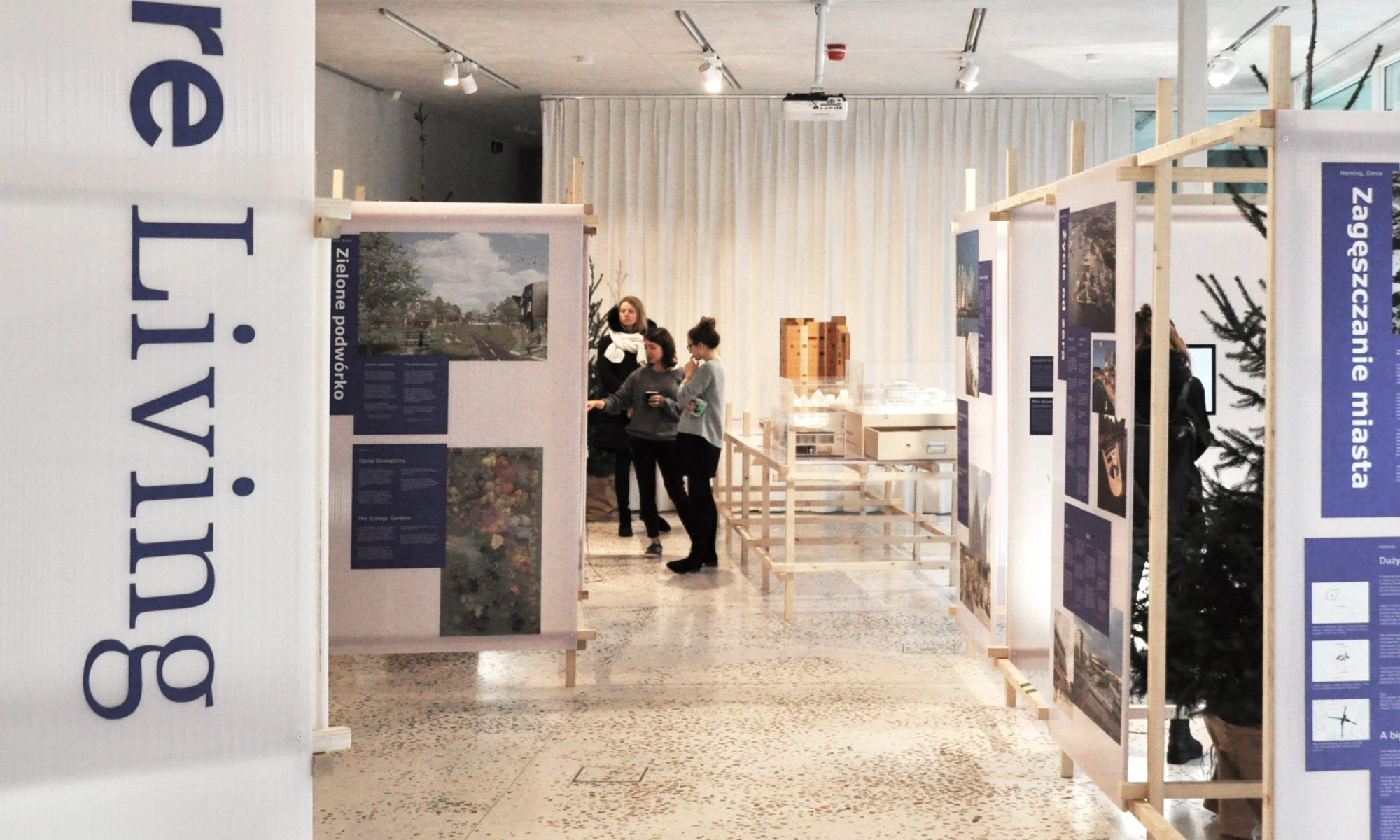 A modern school for children and city residents, circular buildings, sustainable social housing or temporary urban spaces integrating citizens and forming the identity of a new district, are just some of the ambitious city development and architectural projects located in various parts of Central Denmark Region and presented at the exhibition Future Living.

The exhibition investigates the challenges we are facing globally and explores new opportunities for the sustainable development of our future – in Denmark and throughout Europe.

Future Living addresses several of the UN’s 17 global goals for sustainable development, where urbanisation, climate and welfare are identified as some of the major global challenges.

Through in-depth insights of specific projects, this exhibition shows how cities and rural areas are rethinked today to solve the challenges of tomorrow. Within the themes of sustainable cities & communities, welfare and education and climate change adaption, the projects will give examples of how we can rethink the future and contribute to the sustainable development of our society.

Future Living is an international exhibition developed as part of Aarhus European Capital of Culture 2017. Its aim is to invite cities and citizens around Europe to discuss and to create ideas and solutions on our common future. Warsaw is the first stop on its international tour.

In Poland, the exhibition will be presented at the newly opened ZODIAK Warsaw Pavilion of Architecture (8.03-26.05.2019) and Bałtyk/Concordia Design in Poznań (June-August 2019).

The exhibition is curated by Rising Culture and Business/Denmark and developed in cooperation with the Municipality of Aarhus, Denmark and the Danish Cultural Institute in Poland.

Co-operation: The Capital City of Warsaw, the Warsaw Branch of the Association of Polish Architects and Concordia Design in Poznań.

On December 3, 2018, a meeting regarding the development of green areas in the Służewiec office area was held at the ZODIAK Warsaw Pavilion of Architecture. The meeting was attended by representatives of the city authorities and representatives of development companies, agencies and other entities interested in the discussed areas. Mr. P. Sawicki – director of the Economic Development Department of the Capital City of Warsaw Municipal Office, discussed the concept of development of green areas along with planning assumptions for the Mokotowska Office District. The Green Board of the Capital City of Warsaw (Zarząd Zieleni) presented an architectural development plan for 9KDD and 13 KDD plots.

GROW WITH WARSAW is a series of workshop meetings for real estate investors. Its aim is to present the spatial policy of Warsaw and to develop – through an open dialogue – proposals for system solutions that will guide the Study of the conditions and directions of spatial development of the Capital City of Warsaw, shaping the spatial policy of the city. 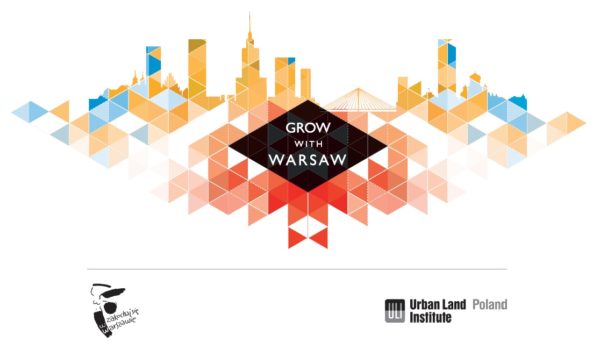 The organizers of GROW WITH WARSAW are the Architecture and Spatial Planning Department and the Economic Development Department of the Capital City of Warsaw Municipal Office. Urban Land Institute Poland is responsible for the substantive preparation and organization of workshops and moderating discussions.

As part of GROW WITH WARSAW, on November 29, 2018, the last meeting of the program will take place at ZODIAK Warsaw Pavilion of Architecture.

Over the last 12 months five meetings have been held with each of them dedicated to a different sector of the real estate market. Participants talked about topics such as: 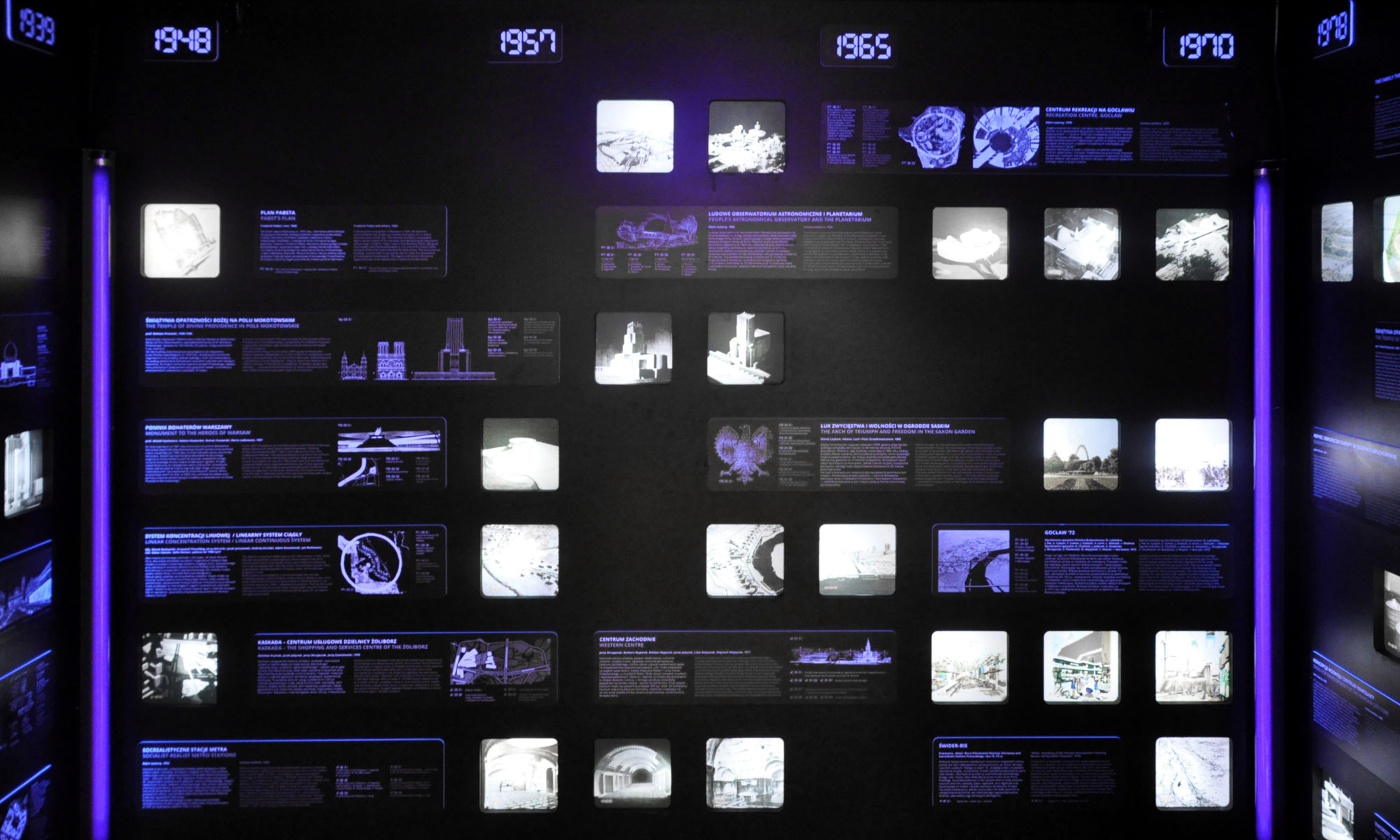 Futurama Warsaw is an exhibition about the spatial potential of Warsaw and the potential of Warsaw architects. The introduction to the exhibition is a map of the Warsaw land reserves, or “dormant” areas that may in the future serve the implementation of various types of investment plans ranging from transport infrastructure through green and sports areas up to architectural developments.

The curator of the exhibition, architect Jakub Szczęsny, proposed to eight Warsaw architectural studios to interpret the potentials dormant in the Millennium Route. Its originator was Mayor Stefan Starzyński, however the route has never been created.

Today, due to the development of the city, the concept of merging Praga Północ and Praga Południe districts becomes relevant again.

ZODIAK
Based on the Zodiac, the astrological tradition of reading the future from the position of celestial bodies dates back to time immemorial and intrigues many to this day. Who has never looked at the horoscope section of a magazine in search of answers to what the future might hold? While neither architecture nor astrology are regarded as scientific disciplines, both draw on science and both disarm the more critical minds with their the desire to enchant the future and enthral anyone hungry for knowledge about what is to come. Astrologers offer recipes for winning a spouse or a fortune, while architects create visions of a better future. For the public, the most recognizable expression of these visions are the computer-generated visualizations of architectural projects, always depicting the happy residents of buildings surrounded by paradise-like gardens situated beneath the gracious and tranquil, eternally blue sky. Among both architects and astrologers, one can encounter people truly dedicated to bringing a better life to others and scheming cynics shamelessly exploiting human naivety.

FUTURAMA
One such attempt to enchant the future was — to some extent — the Futurama, one of the most important elements of the 1939 New York World’s Fair. Created by the American designer Norman Bel Geddes, Futurama — the main part of which was an enormous mechanized model of a future city — showed how America could look twenty years later. The unfulfilled visions of flying cars — later depicted in popular culture, from The Jetsons and Blade Runner to the animated series of the same title — were joined by quite realistic inventions, such as the automated motorways prototyped in the 1960s by General Motors (the exhibition’s sponsor) and, popular since the 1970s, ‘urban malls’, i.e. city zones featuring a complete separation of pedestrian and car traffic. The exhibition has become a breeding ground for radical modernist reformers, including Robert Moses, the ‘master builder’ of New York City, whose missteps (e.g. the Cross-Bronx Expressway, cutting through the neighbourhood) and achievements (e.g. extending the acreage of city parks) still affect the lives of Great Apple’s citizens.

WARSAW
Although at first glance the history of Warsaw does not abound in utopian social ideas or unrealistic technological visions, the Archigrest group’s Time Machine brings us closer to a number of already forgotten, surprising architectural projects. The installation also shows how specific taxonomies of ideas, such as the triumphal arches or the Temple of [Divine] Providence, have come back at different points in Warsaw’s history, often appearing and disappearing for several decades. One could say that Warsaw’s pre- and post-war architects generally did not make attempts at imagining reality on any abstract temporal scale, as in the visions presented during the exhibitions of impossible architecture, Terra 1 and Terra 2 in Wrocław. They had to respond to present-day problems, the time horizon for which were celebrations such as The Six Year Plan or other, often unrealistic deadlines for the delivery of flats, schools, green area pavilions, or department stores for the capital’s Internal Trade Company, of which there was always a shortage. Since the beginning of the 20th century, architects and planners have been confronted with the limiting reality that required pragmatic solutions disallowing any excessive recourse to fantasy. And yet we owe the green aeration corridors, the reconstruction of the Old Town, the no longer existing urban icons, Supersam and the Chemia Pavilion, and the holistically designed housing estates, from Żoliborz to Ursynów, to their vision, ambition and almost superhuman perseverance. Here, it is worth turning to the Time Machine again — many of the unrealised, yet far-reaching plans were ‘enchanted’ in the form of urban records. These include the 200 metres height limit for buildings in parts of the Śródmieście district — introduces by Mayor Stefan Starzyński, and still in force today — or the inclusion in local plans of many roads and routes that have not yet been completed, and which make up the map of land reserves. We bring this subject closer within the framework of our exhibition, a part of which is:

THE MILLENNIUM ROUTE [TRASA TYSIĄCLECIA]
According to Mayor Stefan Starzyński, the Route and Tysiąclecia Street were to be the modern backbone connecting Praga Południe and Praga Północ, parallel to Towarowa Street and the road running along the former Jabłonowska Railway (which today is the Wał Miedzeszyński-Szczecińskie Embankment- Helskie Embankment, sequence of streets that comes to an abrupt end). According to post-war urban planners, they were supposed to provide a collision-free route from the Miedzeszyński Embankment to the today’s Żaba Roundabout by crossing two railway lines, Skaryszewski Park, several large housing estates and the mostly historic buildings of Kamionek. Both the Millennium Route and Tysiąclecia Street appeared in a number of subsequent urban studies and investment plans, including the list of priorities for EURO 2012, but to this day, both of them remain unrealised, although they were included in the next Local Planning documents and in 2018 the City Hall managed to obtain funds for the construction of a tram line running along the Międzynarodowa Street and the allotment gardens that would to connect Gocław with Waszyngtona Avenue. The future shape of the route remains unknown, leaving plenty of room for imagination.

ARCHITECTS
This is why we decided to treat the MILLENNIUM ROUTE/TRASA TYSIĄCLECIA as a pretext to speak about the future, covering not only how our space (landscape, architecture, infrastructure) will look like, but above all how — hypothetically speaking — we will live tomorrow or in a few decades. We have invited eight architect teams, differing in their interests and ways of working, as well as the duration of their practice and often radically dissimilar professional experiences. What they do have in common is an intellectual openness, healthy criticism, good sense of humour and the desire to undertake a risky experiment — namely, a journey into the future. (These are all features, we believe, all creatives including architects should possess.) We gave the teams a complete freedom in defining the scope of their project, the selection of topics, and means of expression. For comments on the Millennium Route we also asked the urban planners: prof. Krzysztof Domaradzki, whose studio has developed the local development plan of the Route and Prof Sławomir Gzell, whose students at the Faculty of Architecture, Warsaw University of Technology have worked on this subject and created a series of films, also presented at the exhibition. Zodiak, Warsaw Architecture Pavilion will also have room for Stół Architekta/The Architect’s Table, designed by Maciej Siuda in collaboration with Michał Jońca, including their personal manifesto about the Route.

We believe that Zodiak will become a space where Warsaw residents, visitors and architects will be able to see interesting, important, and good architecture and as well as all related phenomena. We also hope that Zodiak will become a meeting place for various groups of architects, students, city activists, and representatives of professions that deal with the shaping of urban space. However, it is also important for us to show the meaningful potential of architects and how much they can offer us — not only as professionals and sometimes artists, but ALWAYS as IMPORTANT PARTNERS in shaping the future.

The space located on the first floor of the ZODIAK pavilion is the business card of Warsaw. It will be the best place for arranging meetings with representatives of scientific units, leading technology transfer centers and business environment institutions as well as hosting domestic and foreign delegations as part of the service provided to investors by the Economic Development Department of the Capital City of Warsaw.

It is a comfortable meeting place situated in the very center of Warsaw dedicated to workshops, seminars and conferences related to the promotion of Warsaw’s potential, innovations within the city management as well as small talks and negotiations requiring a prestigious location. Glazed, bright interiors host important events for Warsaw related to urban economic, social and scientific innovations as a platform for cooperation between representatives of the capital’s science, economy and administration circles. 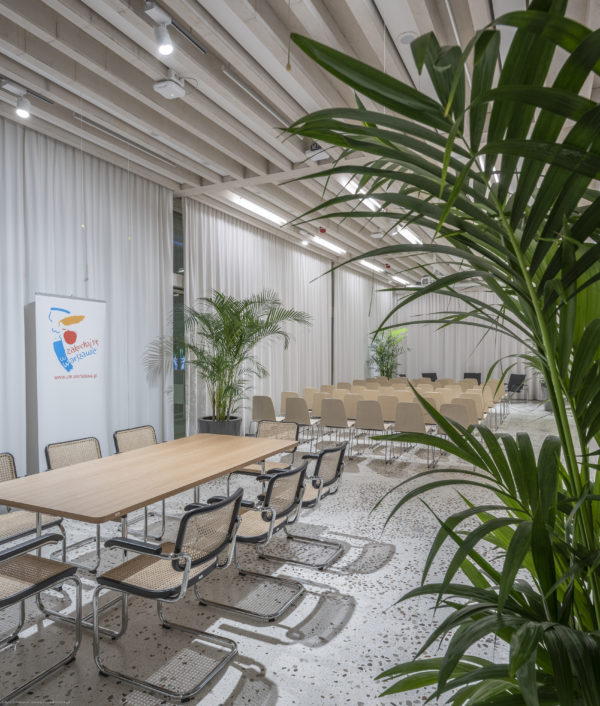