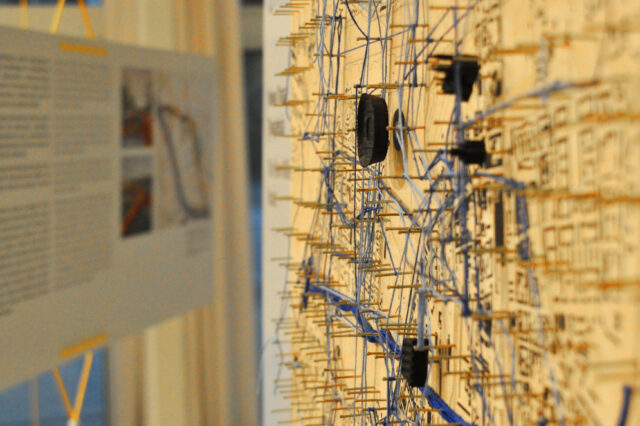 Futurama Warsaw is an exhibition concerning the spatial potentials of Warsaw and the potential of Warsaw architects. The introduction to the exhibition is a map of Warsaw’s field reserves, i.e. “dormant” areas that may in the future serve the implementation of various types of investment projects, from transport infrastructure through green and sports areas, to cubature construction. The curator of the exhibition, architect Jakub Szczęsny, issued a proposal to interpret the potential of Trasa Tysiąclecia (EN- Millenium Route) to eight Warsaw-based architectural studios. Its originator was President Stefan Starzyński, the Route was never created. Today, due to the evolution of right-bank Warsaw, the concept of merging the districts of Praga Północ and Praga Południe is becoming valid again.

Based on the signs of the Zodiac, the tradition of reading the future from the star constellations in the sky dates back to time immemorial, intriguing many to this day. Who of us, when browsing through colour magazines, hasn’t once looked into the horoscope section, seeking answers to what the future holds for us? Both architecture and astrology draw on various sciences, while not being sciences themselves, and are joined together by the desire that disarms the more critical minds to divine the future and “enchant” people hungry for knowledge about tomorrow. Astrologers, therefore, offer recipes for finding a spouse and gaining fortune, while architects create mirages of a better future with their designs. The most widely recognized expression of these visions is computer visualization, always depicting happy inhabitants surrounded by idyllic gardens of buildings, all beneath graciously spreading blue skies. Among both architects and astrologers, there are those who deeply believe in the mission of offering a better life, as well as resourceful cynics who shamelessly exploit human naivety.

In a way, such an attempt at divination was the Futurama opened in 1939, which was one of the most important elements of the World Fair in New York. Created by American designer Norman Bel Geddes, Futurama, whose main part was a giant mechanized mock-up, showed what America could look like twenty years later. Visions of flying cars (later picked up by popular culture, from the Jetsons and Blade Runner to the animated series sharing the exhibition’s title), which were not fulfilled in the 20th century, intertwined with quite realistic inventions, such as the automated motorways, prototyped by General Motors (the sponsor of the exhibition) in the 1960s, and fashionable “urban malls”, which ensured complete separation of pedestrian and motorised traffic. The fair became fodder for radical reformers of the modernist era, led by the “chief builder” of the city of New York, Robert Moses, whose mistakes (e.g. dividing the Bronx with a motorway) and achievements (e.g. repeatedly enlarging the area of urban parks) continue to have an impact on the lives of the Big Apple’s inhabitants.

Although at first glance the history of Warsaw is not teeming with utopian social ideas or unrealistic technological visions, the Time Machine built by the Archigrest group showcases several surprising designs that we have already forgotten about. The installation also shows how specific typologies of ideas, such as triumphal arches or the Temple of Providence, were a recurring element in the capital’s history, appearing and disappearing often for several decades. One could risk stating that pre- and post-war Warsaw architects usually did not dare to imagine reality on an abstract time scale, similar to the visions presented during the Terra 1 and Terra 2 impossible architecture exhibitions in Wrocław. They had to respond to current issues, for which the time horizon included opportunities such as the Six Year Plan or other, often unrealistically set deadlines for the execution of deficit apartments, schools, pavilions in greenery, and department stores of “Stołeczne Przedsiębiorstwo Handlu Wewnętrznego” (EN- the Capital City Enterprise of Internal Trade). From the early 20th century, architects and planners had to struggle with the limiting reality that required pragmatic solutions without exaggerated recourse to fantasy. But it is to that visionary nature, ambitions, and even to superhuman persistence that we owe to the wedges aerating the centre, the reconstruction of the Old Town, the no longer existing urban icons in the form of Supersam and the Chemistry Pavilion, or the holistically designed cooperative housing estates, from Żoliborz to Ursynów. Here again, it is worth referring to the already mentioned Time Machine, because many of the unrealized, but far-reaching visions were “enchanted” in the form of urban records. This was the case, for example, with the two hundred meter height limit for buildings in the part of Śródmieście, designated during the time of President Stefan Starzyński, or the inclusion in the local plans of many roads and routes that are yet to be completed, constituting a kind of map of field reserves, which we are approaching as part of our exhibition, and which includes:

In the intention of President Stefan Starzyński, the Route along with Tysiąclecia Street was to be a modern backbone connecting Praga Południe and Praga Północ in parallel to Towarowa Street, and the road running along the former Jabłonowska rail line (which today is a suddenly breaking sequence of Wał Miedzeszyński-Wybrzeże Szczecińskie-Wybrzeże Helskie streets). According to post-war urban planners, their purpose was to ensure collision-free continuity of traffic from the Miedzeszyński Embankment to today’s Rondo Żaba, crossing two railway lines, Skaryszewski Park, several large housing estates and, in most cases, the historic buildings of Kamionek. The route and the Tysiąclecia Street had different fates, making their way into subsequent urban development and investment plans, including the list of EURO 2012 priorities. To this day, both of them remained unrealised, although they were included in subsequent Local Plans, and in 2018 the city managed to raise funds for the construction of a tram line running along Międzynarodowa Street and allotment gardens, intended to connect Gocław with Waszyngtona Avenue. The Route, therefore, still has an unknown shape, which leaves room for imagination.

That is why we decided to treat the Trasa Tysiąclecia as a pretext for a statement about the future, covering not only what space (landscape, architecture, infrastructure) will look like, but above all how, hypothetically speaking, we will live tomorrow or in several decades. We have invited eight highly diverse teams, from their profile of interests and different work methods to different durations of practice, and often radically different professional experiences. What unites them is primarily intellectual openness, healthy criticism, a sense of humour and a willingness to undertake a risky experiment in the form of a journey into the future. These are features that, in our opinion, should be represented by creative people, including representatives of the architect’s profession. We gave the teams free rein in defining the project’s scope and the selection of issues and means of expression. We also asked the urban planner, prof. Sławomir Gzell, whose students dealt with this subject as part of classes at the Faculty of Architecture of the Warsaw University of Technology, creating a series of films, also shown at our exhibition, for a comment concerning the Route itself. In the space of the Warsaw Architecture Pavilion, there will also be room for the Architect’s Table, designed by Maciej Siuda, who smuggled within his personal manifesto concerning the Route.

We believe that Zodiak will be a place where Warsaw’s residents, visitors and architects will be shown interesting, important and good architecture, and phenomena related to it. We also hope that Zodiak will become a meeting place for various groups of architects, students, urban activists, and representatives of professions related to shaping space. However, it is also important for us to show significant the potential of architects is, and how much they have to offer not only as professionals, sometimes artists, but ALWAYS as IMPORTANT PARTNERS in shaping the future.