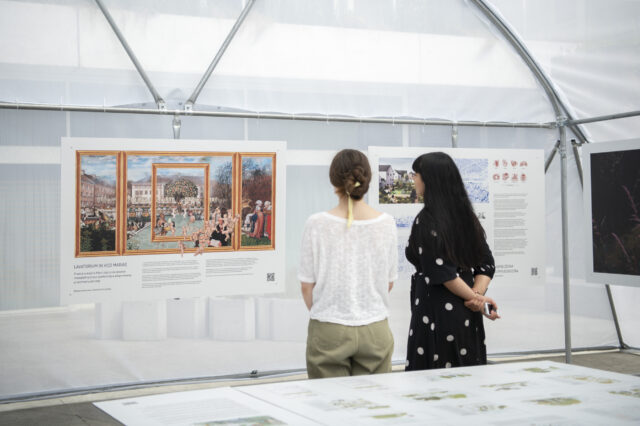 Futuwawa looks to the future with hope, but also with pragmatic care. Her eye is still drawn to futurological and unfettered ideas for the city, but today, as never before, her attention is focused on what is fleeting.

The exhibition can be seen at “Wyspa Cienia” (EN – the Island of Shadow), an installation in the square in front of Zodiak, which brings a respite from the heat of increasingly sweltering days. We have created a place from which you can look at Warsaw from a distance, switch off from its hustle and bustle and focus on reading the 19 most interesting visions of the future.

Green, colourful, but also cloudy works by younger competition participants can be found in the large showcases at the Wiecha arcade.

Futuwawa – Cities that are good to live in continue to reinvent themselves. As always, the 5th edition of the FUTUWAWA competition is looking for visionary ideas for the future. This time, however, it puts them against specific challenges that were diagnosed in the emerging study of the conditions and directions of spatial development in the capital. One of them is the question: “How will we live in Warsaw in 30 years?”. The answer to the contest question could be formulated in the form of a specific solution or considered theoretically, descriptively, metaphorically, conceptually or futurologically. We have invited professionals, amateurs, young people and the youngest to join in shared reflection on the capital’s future. We have received 242 proposals. Ideas were evaluated by an interdisciplinary jury and the audience.

Architect of the exhibition: Tomasz Świetlik

Organizers: Fundacja Puszka i and the Capital City of Warsaw