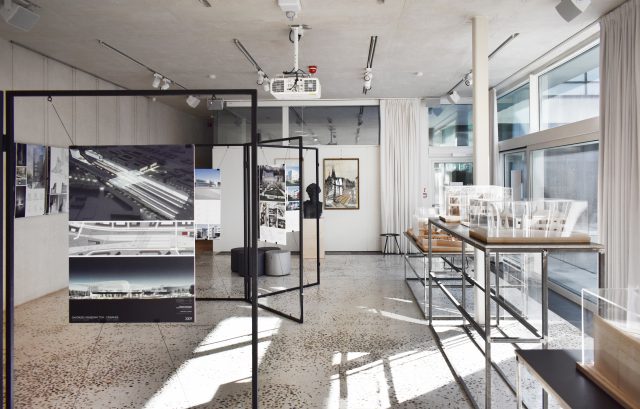 We invite you to an exhibition of the creative accomplishments of Bohdan Paczowski, Jacek Michalski and Stanisław Berbeć – architects active in Luxembourg since the 1960s. The presentation is part of the celebration of a century of diplomatic relations between Poland and Luxembourg.

The exhibition has a cross-disciplinary character. At The Zodiac you will be able to see both original works and contemporary references to the architects’ achievements. There are, among others, mock-ups, graphics, drawings, and films. The architects represent three waves of Polish emigration to the West. Bogdan Paczowski left in 1968, Jacek Michalski in 1970, and Stanisław Berbeć in 1981. We celebrated the centenary of diplomatic relations between the two countries in 2021. At that time, the idea for an exhibition was born among members of the Mazovian Regional Chamber of Architects of the Republic of Poland, intended as a travelling event. Soon, the exhibition will be available for viewing in Krakow and Luxembourg, among others.

The importance of the accomplishments of the exhibition’s heroes is evidenced by the words of Paul Schmit, Ambassador of the Grand Duchy of Luxembourg in Warsaw. Both countries – Luxembourg, as well as Poland – have gone through several difficult periods in history and experienced several waves of emigration. After the Second World War, Luxembourg experienced unprecedented economic development. The country welcomed a large number of emigrants who decided to live and work here. Among other things, Polish emigration appeared, currently amounting to about 5000 people. Several architects from Poland live and work in Luxembourg. Their projects and implementations became a mainstay of Luxembourg’s cities and villages. They participated and continue to participate in the execution of important objects such as Findel Airport (Atelier d’Architecture Paczowski-Fritsch), European Courts (Dominique Perrault / Atelier d ‘Architecture Paczowski-Fritsch), the MUDAM Museum of Contemporary Art (I.M. Pei / Georges Reuter Architectes / Jacek Michalski), Nic High School. Biever in Dudelange (Agence d’Architecture Stanisław Berbec ́ / Schmitz / Hoffmann) and the Municipal Administration in Tuntange (Agence d ‘Architecture Stanisław Berbeć). Some of these architects are no longer active today. Others, the younger ones, continue to work in their profession. Their journeys to Luxembourg were diverse and rich in personal and professional experiences, but the transnational, architectural language allows for easy communication in other countries with different cultures.

Bohdan Paczowski – was born on 5 June 1930 in Warsaw and died on 26 January 2017 in Luxembourg. He was an architect, essayist and photographer. He graduated architectural studies in Cracow and Milan. He was associated with the Parisian “Culture” circles. He authored numerous photos of personalities from “Culture” circles, including Witold Gombrowicz, whom he was friends with. He executed, among others, the “Jean Monnet” headquarters of the European Commission in Luxembourg in 1975. Collaborating with the Luxembourg studio ‘Paczowski et Fritsch’, he carried out, among others, the first expansion of the European Court in 1994, the Luxembourg pavilion at the Expo’92 in Seville, the IFREMER laboratories in Lorient (France, 2002), the terminal of the passenger airport in Luxembourg 2008. He won prizes in numerous international competitions, and in December 2009 won a contest for the design of the Museum of Polish History in Warsaw. He chaired or participated in many juries at international competitions. Among others, his activities included presiding over the Jury of the contest for the Museum of the History of Polish Jews building. He was a member of the IARP, the Ordre des Architectes et des Ingénieurs in Luxembourg and the Milan-based Ordine degli Architetti della Provincia di Milano, and co-founded the Luxembourg Architecture and Engineering Foundation. He published texts, among others, in “Res Publik Nowa”, “Tygodnik Powszechny”, “Zeszyty Literackie”, “L’Architecture d ‘Aujourd ‘hui” and ”Architectural Review”.

Jacek Michalski – was born on 13 June 1947 in Wągrowiec and died on 28 December 2016. An urban planner and architect. Graduate of the Architecture Department at the Warsaw University of Technology. From 1971 to 1974, he was a designer at the Warsaw University of Technology’s Institute of Spatial Planning, Faculty of Architecture. From 1974 to 1978, he worked as an architect at the Central Civil Aviation Office. He worked with Jerzy Hryniewiecki, Zdzisław Hryniak, Wojciech Kubik, Helena Syrkus, Andrzej Pazdej, Maciej and Ewa Krasiński, Olgierd Jagiełło and Jerzy Szczepanik-Dzikowski. From 1982 to 1988 he lived and worked as an architect and consultant in Algeria at the design studios of BEAO and BEWO in Oran. From 1989 to 2016 he worked as an independent architect with the Georges Reuter Architectes and Perry Weber et Associés studios in Luxembourg.

Stanisław Berbeć – was born on 15 March 1954 in Gorzków. Architect and urban planner. He began his civil engineering studies in Lublin, and then undertook studies at the Faculty of Architecture of the Warsaw University of Technology. He left for Luxembourg just before martial law was imposed in Poland. He graduated from Saint–Luc in Liege, Belgium in 1984. He still lives and works in Luxembourg. His research on Luxembourg’s rural architecture ‘Approche typologique de l’architecture rurale au Grand- Duché de Luxembourg’ was published in 1992 by the Luxembourg Ministry of Culture. In 1995 he was awarded the Luxembourg Architecture Prize. He participated in national and international architectural contests, including for designing the Academy of European Law in Trevira (distinction), the EUR Congress Centre in Rome (selection at the 9th Biennale of Young European Artists in Rome) and the Municipal Administration in Tuntange (competition winner in 2005, listed among the projects awarded in Bauhärepraïs 2012). In Poland, Berbeć cooperates with the “Architektura” magazine, through which he makes Luxembourg architecture famous. He is also responsible for the concept and design of the exhibition at the Zodiak.

Honorary patronage: President of the Capital City of Warsaw Rafał Trzaskowski, mEmbassy of the Grand Duchy of Luxembourg in Warsaw

Organizer: Mazowsze District Chamber of Architects of the Republic of Poland