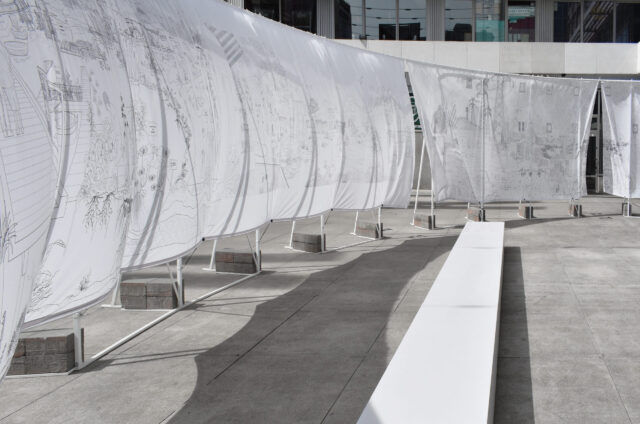 Skrajobraz is an exhibition about the unobvious potential contact points between Warsaw’s building development and the open landscape. It is a record of the effects of workshops that were conducted at the Zodiak pavilion. Thanks to projects by six groups, the exhibition grew right in front of the audience.

Currently, at the Zodiac you can see the Edge of Warsaw Panorama, which is the result of these workshops. It presents a vision of the border that protects the landscape surrounding the city.

Together, the workshop participants sought a strategy to transform and emphasize the landscape features that can counteract chaotic urbanization. The groups, consisting of participants selected in open recruitment, were searching for methods and tools to organize and regulate the development processes. They focused on the so-called “points of resistance” embedded in specific spaces of the capital. The work was carried out under the supervision of the PROLOG +1 curatorial group and Warsaw architectural studios.

Due to the growing interest of architects and planners in peripheral areas, the discussion on Warsaw’s extreme areas undertaken in the project seems necessary. It also fits into the work on the new Study concerning the conditions and directions of spatial development of the Capital City of Warsaw.

The city’s growing population spontaneously poses the question concerning the growth potential of urban necropolises. The function of the cemetery, serving as a legal and cultural barrier, limits the encroachment of buildings, constituting an exclave within the city – an enclosed sacral space. Unfortunately, in the case of contemporary Polish cemeteries, these spaces are often dehumanized. When considering Warsaw’s future necropolises, the need arises to change the perspective and develop a new sacrum/profanum relationship, including these areas in the city’s green infrastructure, so that they could co-create a valuable landscape at its borders.

In what conditions does nurturing what we have tamed build agency stronger than market rules? Can the phenomenon of the collective responsibility of people associated in Family Allotment Gardens create a form of resistance to the uncontrollable spread of cities? Can the empowerment and solidarity of communities associated around nature, craft or production protect the urban landscape from market forces? How can we tame the places “in between” in harmony with nature in order to create an open and causative neighbourhood?

The area of Świdermajer architecture creates an area of scattered points, which as a whole defines the soft boundary of Warsaw. Emerging buildings in the “neo-Świdermajer” style may blur or strengthen the city’s edge. Defining the typology and occurrence of such objects using planning tools can create a cultural form of resistance to urbanization, where the historical continuity of style regulates the capital city’s expansion.

The city’s physical boundary, where urban development ends and the forest begins, contains the potentials of activity and phenomena that cannot exist in the agglomeration’s centre. The peripheries become places of emancipation, a mosaic of diversity almost excluded from the rules in force in the city. Warsaw’s border in the Wawer district will become a study of proceedings in pursuit of strengthening the peculiarities of the boundary landscape (“skrajobraz”), which may, depending on the needs, serve as a place of convalescence from the loud and ”harmful” centre or as a place for “cutting loose” after staying too long in the predictable downtown.

Plastic straws have become a symbol of individualising blame for the climate catastrophe and a pretext for discussing responsibility for waste production. The discussion is ongoing, while more of the garbage we produce continues to build up. Its stockpiling areas are, for hygienic reasons, located on the periphery. They disappear out of sight of people living in the city and become a problem for communities living on its outskirts. The task of incorporating waste management infrastructure into the boundary landscape is a balancing act between local conflict and the long-term urban strategy.

The Warsaw Slope, which is the green slope of the capital, is the location of natural ponds and wetlands, which can serve as an element of managing and counteracting the climate crisis. At this point, it becomes important to create protocols that, based on a case study of the Guci Gaj area, will give the opportunity to protect and expand the existing water absorption points, forming both the city’s blue-green infrastructure and the extensive strips of boundary landscape.