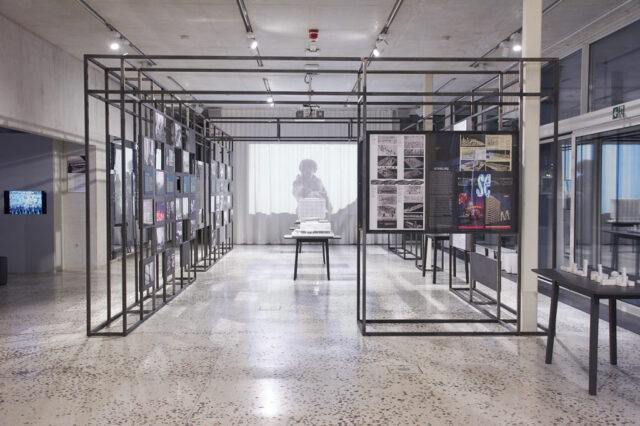 The figure of Zbigniew Karpiński epitomizes the changes in Polish architecture during the twentieth century. Born and raised in a family whose tradition had been rooted in the nineteenth century, he obtained comprehensive architectural education and professional experience before World War II. Since his studies, he had belonged in the community of European architects and took part in international architectural congresses.

Karpiński was an architect with European aspirations and experience. He was a European architect, and even his works from the period of socialist realism (Metaleksport designed with Tadeusz Zieliński, or the Polish embassy in Beijing with Jerzy Kowarski) fell in the functionalist trend of interwar architecture rather than being “socialist in content and national form”.

This also applies to the East Wall – Karpiński’s life’s work. After years of rebuilding the town from the ashes,followed by socialist realist enslavement, it became possible to design the most important part of the capital, in line with global trends at the time. Knowledge of the contemporary thoughts and plans by architects of England, Germany and Scandinavia, whose achievements he appreciated the most, resulted in an innovative concept.The urban space had been divided into two zones: the lower – service zones along the communication artery, and the upper – the residential buildings. They were connected by a long pedestrian passage with access to shopping and dining. Zbigniew Karpiński and his team drafted this model modernist solution with great talent and elegance. The compositional refinement, the elegance of forms, and their appropriateness or decorum – as Giambattista Lodoli would have it – seem to indicate that this architecture truly belongs among European heritage.

The association of the East Wall architecture with the neoclassical theorists is not accidental. Thinking about society in terms of freedom, openness, appropriateness, that is, different from the narrow doctrine of communist “ignoramuses”, had something of the “sympathetic determinism” (after Rykwert) of Neoclassicists. Transforming space in this spirit no longer involved a threat of prosecution, as it had done during the times of socialist realism – although attempts to transform society still carried that risk.

In another dimension, the free, humanistic European thought informed the sons of Zbigniew Karpiński. Also in this respect – independence of feeling and thinking, contrary to the requirements of the communist authorities – Zbigniew Karpiński (and his sons whom he brought up in this vein) can be perceived as an emblem of the independent and European quality of Warsaw. It is for good reason that Warsaw’s modern architecture enjoyed the support of such figures as Leopold Tyrmand and Stefan Kisielewski. The East Wall is certainly the most notableexample, and a symbol of such European architecture in Poland.

Incidentally, it may be worth noting how much expectations in relation to Warsaw’s “European” architecture have changed – after the dramatic experiences of the total destruction of the capital during World War II and the so-called reconstruction – and not only the expectations of architects, the society’s elite, but probably also of the “common people”. Extremely multifunctional, beautiful, and rich in values and meanings, the pre-war buildings in the quarter between Marszałkowska, Aleje Jerozolimskie and Świętokrzyska streets, which made up a wonderful city space, were replaced with their modern antithesis – a surrogate, which nevertheless seemed to delight the residents of Warsaw.

Honorary patronage: General Board of the Association of Polish Architects